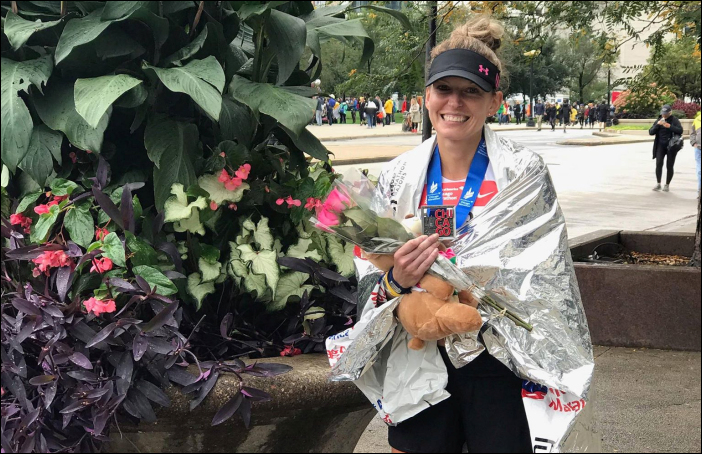 It’s been a little over a year now since I was diagnosed with a bilateral pulmonary embolism and deep vein thrombosis. On October 2, 2017, I went to Urgent Care after my breathing was extremely labored and my heart rate was usually high during an easy six-mile run. I knew something felt incredibly wrong and I was supposed to run the Chicago Marathon in six days. A physician’s assistant expressed he was concerned that I may have blood clots, and strongly encouraged me to go to an emergency room for immediate testing. I took his advice, and a few hours later his suspicions were confirmed. I spent a couple days in ICU to be monitored while receiving blood thinners via IV.

A lot has happened over the past year. I was cleared for easy running two weeks after my diagnosis, and I ran the New York City Marathon at the beginning of November. Even though it was one of my slowest marathons, it was also one of my most memorable races as it represented a celebration of life and health.  A couple weeks later, I reset my focus on my original goal, a Boston qualifying time. In mid-November of 2017 I picked the Coastal Delaware Running Festival Marathon in April as my goal race for the spring. My coach had me cautiously ease into training as I was still recovering from the blood clots. 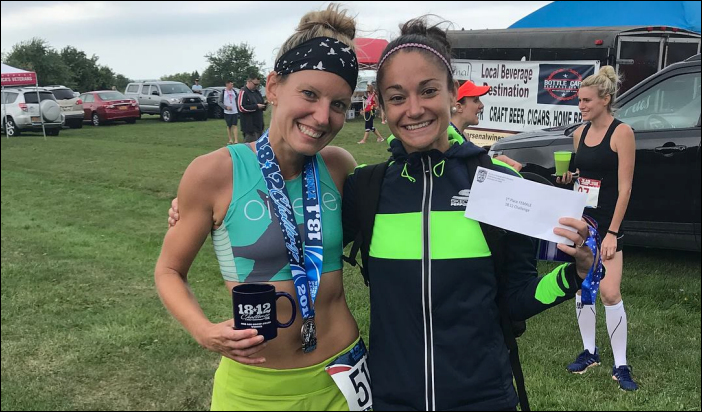 Throughout spring training I continued to have check-ups with my hematologist, and scans of my lungs and legs were routinely done. It took about eight weeks for running to feel comfortable again, but my training in the winter and spring overall went very well. In April I ran my first marathon as a BQ attempt since having blood clots. Despite having a chest cold and hardly sleeping the night before, I pulled off a seven-minute PR running 3:37:34 and it was my first Boston qualifying time with a 2:26 cushion. I was so happy with my progress after what happened less than seven months prior. Once that race was over, I quickly set my sights on running an even faster qualifying time in Chicago that fall. I really wanted to run at least 3:35 to give myself a five-minute cushion for Boston 2020. 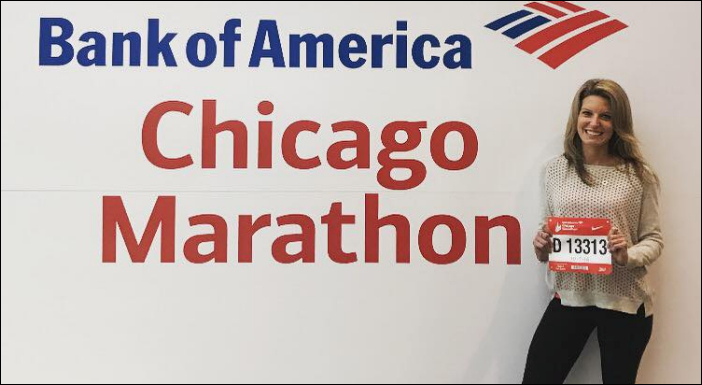 Even though I was so excited to finally run the Chicago Marathon this fall, summer training was rough. It felt like every day was so hot and humid. My body also took well over a month to recover from my spring marathon. Running felt hard for a solid two months after, and the weather did not help. So many runs were done before the sun came up and waking up at 4:00 am became routine. I also obsessed over weather variables such as humidity and the dew point, knowing they affected running performance. I ran a small 5k PR at Jailhouse Rock on a brutally muggy morning, and a small half marathon PR at the 1812 Challenge in less than favorable weather conditions on a hillier than expected new course. My coach encouraged me all season saying that she was confident I was going to have a great fall marathon. But it was tough for me to believe this when training felt so hard.

Once the taper came, I expected my legs to feel fresh and springy quickly. Someone even said to me that my legs must have felt peppy during the taper with the reduced mileage, but they felt anything but that. For some reason I thought workouts would magically feel easy during the taper, but they did not. I started to doubt my goal for Chicago as the race quickly approached. To add to my level of stress, registration for Boston 2019 opened during my taper. I knew there was a strong possibility that my 2:26 cushion would not be enough for my application to run Boston 2019 to be accepted. I had prepared myself for that since I ran the marathon in April. It was truly an honor to just qualify and apply, but the sting I felt when I received the e-mail telling me I had been squeaked out of Boston 2019 could not have come at a worse time. To make matters even more stressful, the Boston Athletic Association reduced qualifying times by five minutes less than two weeks before Chicago. This meant I absolutely had to run under a 3:35 to even qualify for Boston 2020. I had been training for that time all season, but I felt even more pressure knowing that time was an absolute necessity to qualify. I expressed (i.e. whined a lot) my concerns to my coach, and she had a lot of good advice that really helped me get in a better mental place before this race. Once I boarded the plan to Chicago, I vowed that I would only allow myself to have positive thoughts from that point forward heading into race weekend. In all honesty, it made such a huge difference. I finally relaxed and became excited to run. 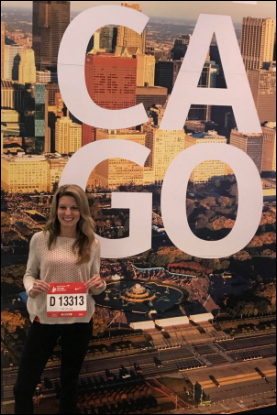 Once I arrived in Chicago on Friday morning, I visited the expo first to collect my bib and try to beat the large crowds. On Saturday morning I ran the 5k as a shakeout run. It was so humid on Saturday after an early morning thunderstorm, but the temperature quickly dropped and the humidity broke as the day went on. On race day morning it was lightly raining as predicted. I was happy that the weather was overcast with rain as opposed to the hot weather Chicago had last year for the marathon. I headed over the to the gate to the start area in Grant Park across the street from my hotel at 5:30 am. I ran a short warm up around 6:30, and then made my way over to my corral and sat on an old Mylar blanket until 15 minutes before the start time. The gun went off at 7:30, and by 7:36 I crossed the start.

My plan for this race was to run the first 3-5 miles around an 8:15 pace, drop it down to 8:10 until mile 20, and try to push the last 10k. I also planned to run on the blue tangent line to try and avoid adding distance to my race. I had heard that GPS was just about useless in Chicago due to the tall buildings, so I invested in a foot pod to be able to accurately monitor my pace. While other runners around me were freaking out over their GPS being way off, I remained calm and relaxed as my foot pod delivered accurate paces to my watch as promised. It rained on and off during the first half of the race, and some stretches had a slight annoying headwind, but I was still on pace and ran through the half at 1:47:30. I knew I would have to pick it up the second half to hit my goal of a sub-3:35.

Around mile 16 my legs started to feel tired. I was still maintaining around an 8:10 pace as planned, but when I checked my pace band I noticed I was about 30 seconds behind where I needed to be to run under 3:35. I told myself to stay calm and that if I held that 8:10 pace until the end, I would at least PR. At mile 20 I checked my pace band again and saw I had gained some time and was right where I needed to be to hit my goal. This lit a huge fire inside of me and I told myself, “I did not come here just to PR. I came to run a faster Boston qualifying time.” I pushed the pace from miles 20-25, but stayed controlled. At mile 26 I pushed even harder and did not look at my watch. I knew the one large hill on the course, known as “Roosevelt Mountain” even though it is only about 10 feet of elevation gain, would be approaching during that last quarter-mile. As I made the right turn up that hill I pushed with everything I had left and braced myself for the pain. My legs were screaming at this point but I knew it would be over quickly and the finish line was only 300 meters away. When I hit the top of the hill and turned left towards the finish line, I quickly looked at my watch and wanted to scream, “I am going to run under 3:34!” I gave one final push over the finish line and burst into tears. My finish time was 3:33:54. This was a 3:40 PR and a Boston qualifying time under the new standards with a 1:06 cushion. I could not be any happier with how I ran this past year since my blood clot diagnosis, and it amazes me how quickly our bodies can bounce back from injuries and illnesses. Will a 1:06 cushion be enough to get me in to Boston 2020 under the new qualifying times? I will have to wait until September 2019 to find out. But until then I will keep on pushing until I finally cross that finish line on Boylston Street. 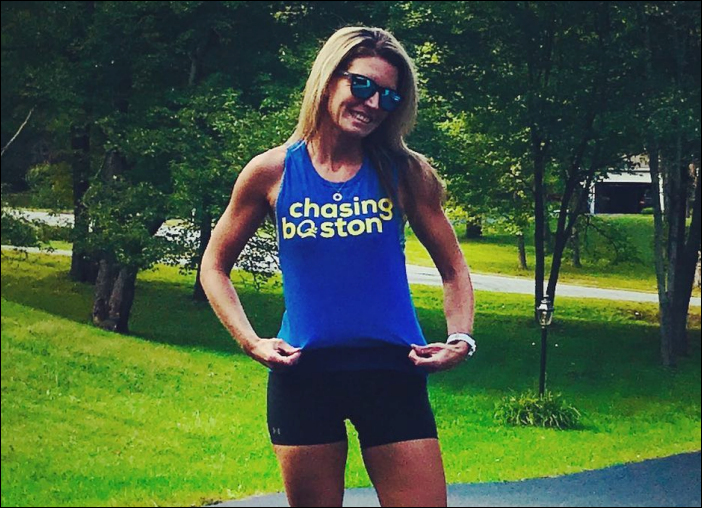