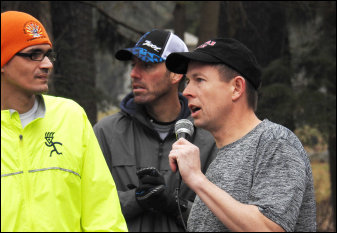 Sunday April 15th was the 30th annual running of the Delmar Dash 5 mile race held annually at the Delmar middle school. The dire forecasts for icy conditions never materialized although communities to the north of Delmar experienced them. Luckily it was good running weather in Delmar with cloudy skies, a cool temperature of about 40 degrees, and little wind enabling some to set personal records.

Following the main race, kids’ races were held on the track in the back of the middle school. From toddlers to teens, the kids ran laps around the oval indoor track.

One of HMRRCs senior runners, Anny Stockman, set a USA national record for 85 year old and older women in a time of 67 minutes and 20 seconds! Congratulations Anny!

The two top women women, Diane Ryan (29:52) and Olivia Beltrani, were in a tight race with Diane winning in 29:52, two seconds ahead of Olivia, both under a 6 minute per mile pace. In third place was Nicole Soblosky with a time of 30:07.

We thank Renee Tolan for her diligence and patience in helping to have the Delmar Dash be part of the USATF GrandPrix Races. It is quite an honor. The Delmar Dash is also part of the HMRRC Grand Prix races. To meet the requirements of both, two finishing lines were created: one for the USATF, which was at the 8K (4.97097 miles); and one for the HMRRC, which was at the five mile mark.

Many thanks go to previous race directors Tom and Marcia Adams, as well as Maureen Cox, Ed Hampston, Rick Munson and the many volunteers who helped to ake the race run smoothly.

Click HERE to see great pictures taken by Jim Franco of Spotlightnews.com and Charles and Christine Bishop for the HMRRC.