Off the Road: Running Economy 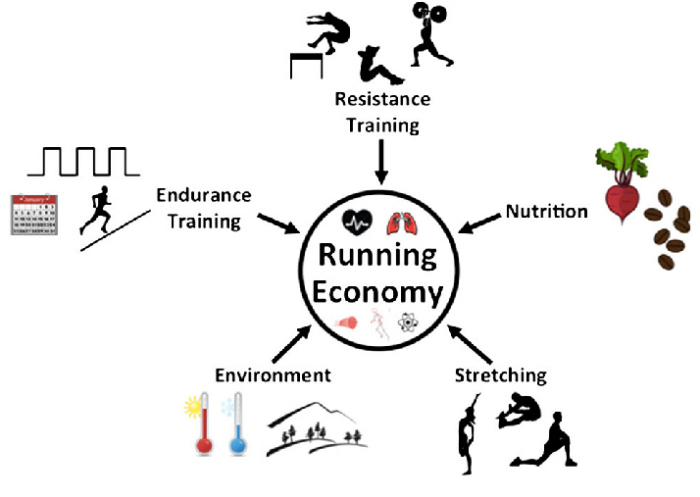 The pursuit of running excellence is one of those elusive goals. The minute you think you “have it” there comes another turn and a new goal presents, just out of reach. Running economy is a concept that has been around for a while and is defined as one’s efficiency. Getting technical for a moment, aerobic power is defined by one’s VO2 max, the amount of oxygen the body can absorb during a given time period. VO2 max is generally measured in milliliters/kilograms/minutes which translates to milliliters of oxygen consumed per kilograms of body weight per minute. In truth, this is not something one can simply stand on a bathroom scale and instantly get a “number” for.

Traditionally VO2 max is determined with a treadmill run wearing a mask that allows for the technician to do a gas analysis of the run. There is time and expense associated with whole process that is both inconvenient and expensive for the casual runner. And what would one do with the information anyway? Is it going to change running patterns or one’s lifestyle? Cause one to adopt new running habits? Probably not, but even without knowing one’s VO2 max number there are some lessons to be learned here that can help improve one’s running efforts, especially come race day.

Easily the simplest way to improve one’s running economy is to run more. This is a no brainer, even for a novice. An increase in mileage or improved level of fitness with a year’s worth of training can lead to significant improvements in a 5k or 10k time. The basic reason for this is that the body adapts to the stresses placed upon it. If running has become the form of exercise one uses on a regular basis the body “adapts” to the stresses and strains of the daily run and makes itself become more efficient and economical in its energy usage as one goes about the daily routine.

There are several other methods that can be used that will improve running economy and improve performance. Improving one’s strength will also improve running economy. Remember, strength is the ability of the body to produce force. Stronger athletes are generally faster. Periodically lifting weights for the legs will help in this area. A word of caution is in order. Weight training for a runner can reach a point of diminishing returns. Simply put, you can do too much. The point is to get stronger, not necessarily “look” stronger with added bulk. This is one of those “train with intention” areas. Why are you lifting weights in the first place? The correct answer for a runner is to run faster. If you start to get concerned about muscle definition and how your rear end, quads or calves look you are starting to do too much.

Another strength area that also warrants a word of caution is the use of plyometric activities. Plyometrics are exercises that create a momentary supra-maximal force on the muscle-tendon units in the body. The exercises that are done activate the body’s stretch reflex. This can produce a powerful “rebound type effect” that can strengthen these areas and train the nervous system to produce force more quickly.

Done incorrectly this extra force can be a quick right to the breakdown lane. What seems to be particularly in vogue these days are various types of box jumps; jumping up and down off boxes. These are great exercises assuming one can squat 2x your body weight and have been training regularly for at least three years. If that is not the case simpler plyometric exercises such as skipping or line hops back and forth or jumping rope will gradually introduce the extra stresses and benefits plyometrics can offer the runner.

Altitude training is another area that can make the body more efficient. Realistically the Capital District is not at the “right” altitude for this to make a difference. It is generally believed that one needs to be at least 1500’ above sea level to start to get the effects of altitude. The ridge of the Green Mountains’ Long Trail may be the closest place with the desired elevation, the Helderbergs just crack the 1000’ mark and if one is willing to drive a few hours Lake Placid has an elevation of around 2000’.

As most anyone would know who has followed the sport for any length of time that living or training at altitude can produce physiological effects on the body (an increase in red blood cells) that facilitates one’s oxygen transferring ability. High elevation countries like parts of Kenya have been able to capitalize on their geographical location and have produced scores of world class runners over the last few decades. Boulder, Colorado is an area in the USA where many athletes live and train to get similar benefits. Nike has even built a house in Oregon that simulates high altitude. One can get two points from this, firstly that altitude can help with running efficiency and that for most training at altitude is an unrealistic consideration.

On the other hand, flexibility is something everyone can (and should) pay attention to. Improvements in this area pay benefits in the short and long-terms. Post-exercise flexibility can help prevent injuries as this practice imparts a “margin of error” or an increased range of motion and improves the elasticity of the muscles, tendons, ligaments and fascial planes of the body. Together with the skipping-type of plyometric work mentioned above would make for a safer implementation of the plyometrics. To a lesser degree flexibility will also improve one’s body symmetry and ultimately one’s coordination. These two qualities together aid one’s efficient movement. But again, one can stretch too much dampening the stretch reflex and the stiffness required for this reflex to respond most effectively. One should “optimize” not maximize flexibility.

One area many do not relate with running economy is that of nutrition. Few would argue that a dehydrated runner is not going to go too much farther, too much faster. Proper hydration plays an important role but so would proper nutrition that provides the energy stores that fight fatigue. The use of sports drinks, monitoring for clear urine on race days and possibly experimenting with carbo-loading all may prove to be beneficial come race day.

A final area, of interest to me, is that a spinal adjustment may also improve one’s running efficiency. There have been many studies performed on how spinal adjustments help with the expression of the biomotor skills of speed, strength, endurance, flexibility and the ABC’s of agility, balance, coordination and skill. Interestingly there is evidence that this therapeutic intervention has a positive benefit on the expression of each of the skills.  I am currently working on a project at SUNY Cortland where we are testing to see if getting an adjustment influences one’s running economy. Massage is another area that can facilitate efficient movement. The mechanical action of rubbing can remove the waste products of muscle metabolism that build-up with from training allowing for improved circulation and the nutrient delivery discussed above.

While running economy might not be of concern to the runner attempting their first 5k it would be of concern for the athlete chasing PR’s or concerned with their placing at a terminal championship. One solution is to tighten one’s belt and just train harder. That will give benefits IF (the big if) one does not get hurt doing it. A second option to consider is the addition of other forms of training that could benefit one’s overall plan such as weight training, flexibility work, cleaning up one’s diet and scheduling some regular body work. Seen in this light the options are simple; one can train harder or one can train smarter, the choice is up to you.

Russ Ebbets, DC is a USATF Level 3 Coach and lectures nationally on sport and health related topics. He serves as editor of Track Coach, the technical journal for USATF. He is author of the novel Supernova on the famed running program at Villanova University and the High Peaks STR8 Maps trail guide to the Adirondack 46 High Peaks. Time and Chance, the sequel to Supernova is due out in the Spring of 2018. Copies are available from PO Box 229, Union Springs, NY  13160. He can be contacted at spinedoctor229@hotmail.com.