It began with a cocktail hour and loads of tasty hors d'oeuvres for all to enjoy while chatting with friends. Gone was the running gear replaced by sophisticated apparel on runners' toned bodies. 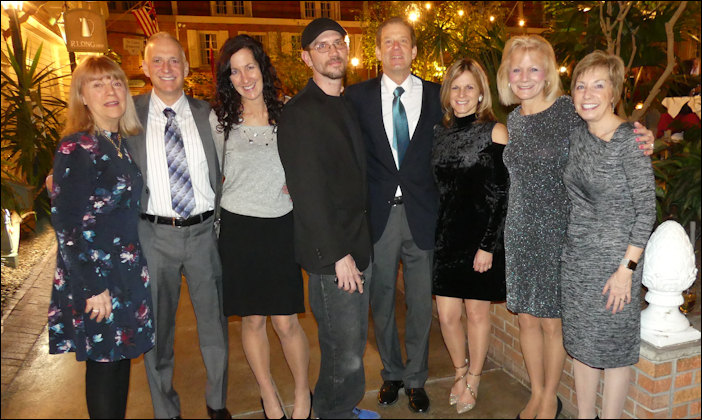 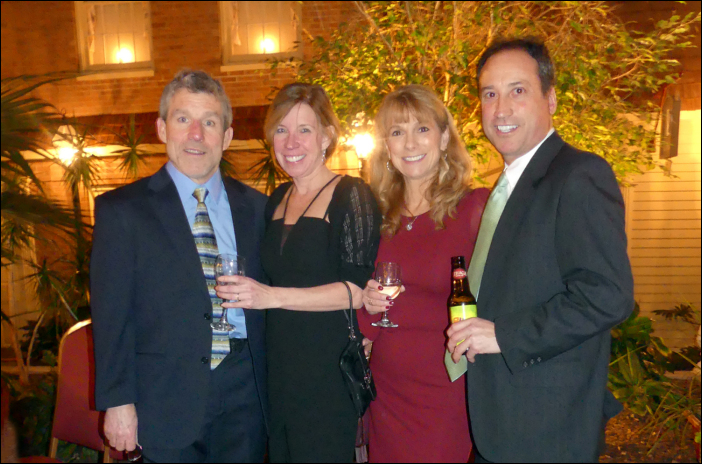 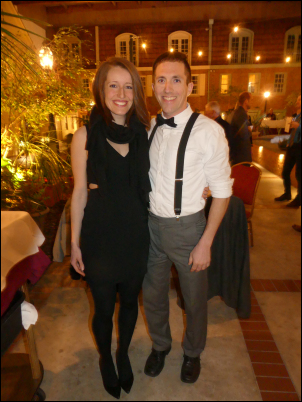 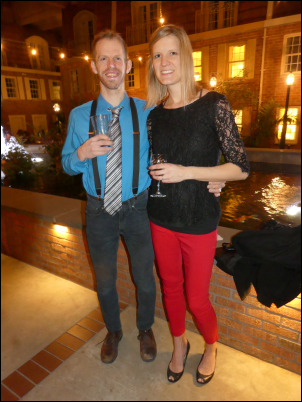 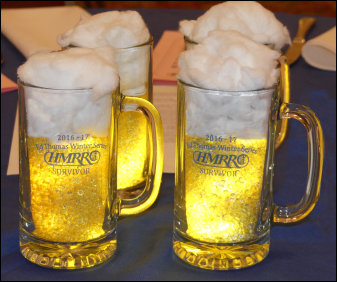 As people entered the dining room for an elaborate dinner, they saw in front of them  tables decorated with centerpieces made lovingly by Marcia Adams as remembrances for people to take home with them.  HMRRC mugs from the 2016-2017 Ed Thomas Winter Series had been filled with glowing golden beads with a LED light inserted at the bottom of the “foam.”  It was a true runner’s dream: a model of a perpetually frothy welcoming glass of beer!

Poster boards of Hall of Fame Inductee John Parisella and the Grand Prix winners
made by Bill Meehan decorated the dining room. 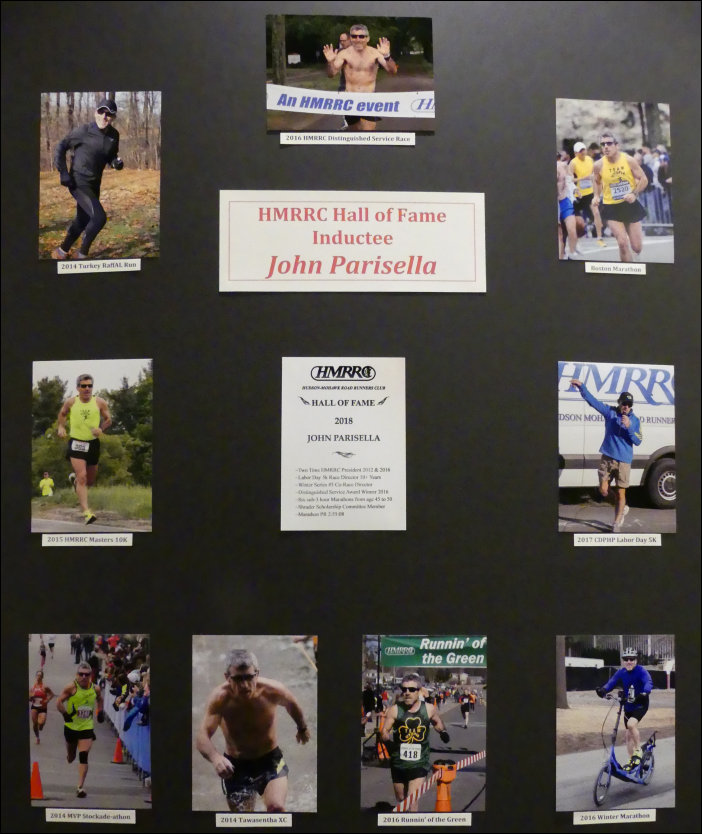 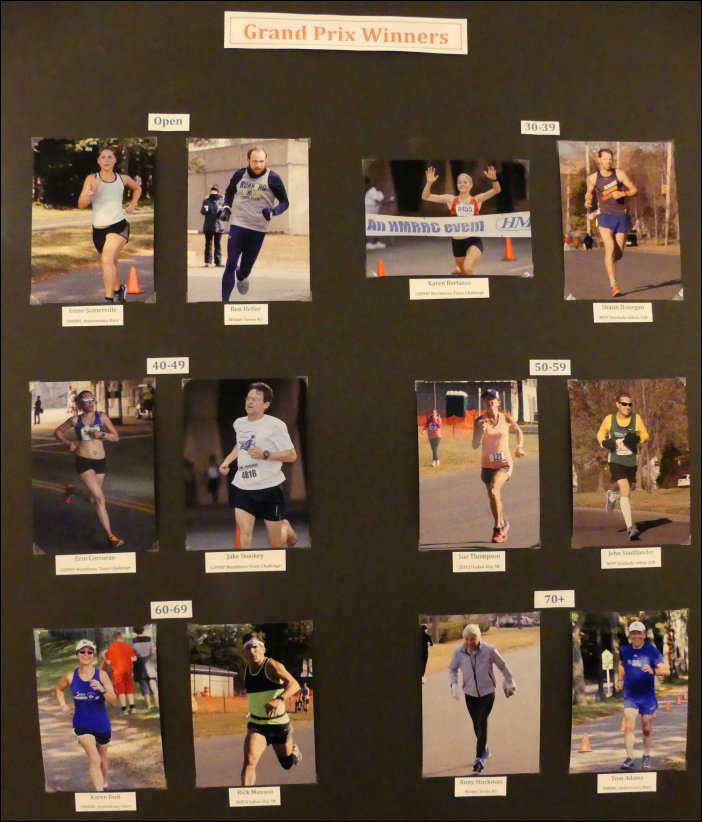 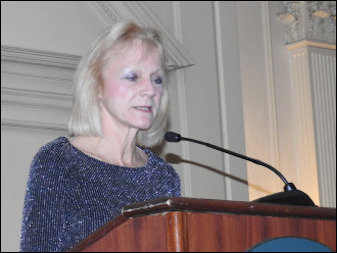 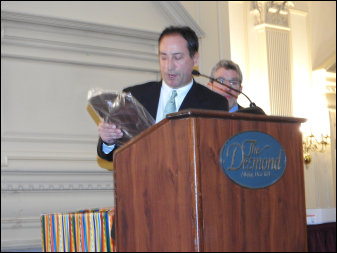 Above left: Nancy Briskie began the ceremonies by welcoming everyone. Above right: Jon Rocco inducted John Parisella into the HMRRC Hall of Fame.

“John has been active as a Club Officer, Race Director, Race Coordinator, and Committee Chair.  Specifically, John served as the club’s Executive Vice President in 2011 and 2015 and served as Club President in 2012 and 2016.  As Vice President, John would assume the duty as Chair of the Shrader Scholarship Committee.  John’s longest serving role is as the Race Director of the Labor Day Race starting in 2007 and 2018 will mark his 12th year.  John has also served as Co-Race Director of Winter Series #5.  At the CDPHP Workforce Team Challenge, he acts as both start line and finish line coordinator.  John has been a past administrative member of the Hall of Fame Committee, and in 2016 earned the club’s Distinguished Service Award.
"John has also exceled at many race distances - he ran a 5:02 Colonie Mile at age 45, a 5:14 at age 50.  His 5K PR is 17:34 and he broke 18 minutes in the 5K at both age 48 and 50. He ran equally impressive times at Runnin’ of the Green 4M with a 5:48 pace at age 45 and a 6:07 pace at 52.  He broke an hour at the Stockade-athon at age 51 and has a PR of 1:24 for the half.  In the marathon, John ran a 2:55 time three years in a row starting in 2004 and ending in 2006 with a PR of 2:55:08 at age 48.  He has also run Boston 4 times in all kinds of weather conditions imaginable.  John recently entered a new age group and still has goals, but I would guess they include staying healthy, having fun with running, riding his Elipti-Go, and giving back to the club.
"It certainly goes without saying that John exemplifies what a Hall of Fame member should be - a serious runner, competitor, and a stalwart HMRRC contributor.  We welcome him to the HMRRC Hall of Fame.” 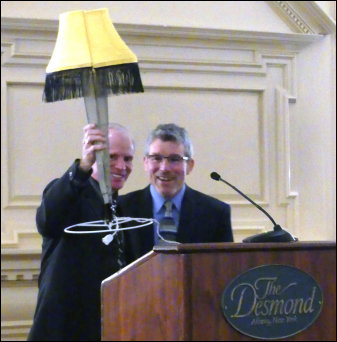 John then thanked the many people who helped him to be where he is today and singled out coach Jim Bowles, founder of Team Utopia, for helping him to raise the bar on his competition.  He presented him with a gift.

Ray Newkirk gave a President's Appreciation Award to Charlie and Arlene Woodruff and Fleet Feet for their ongoing and significant support of runners and the running community. Ray noted that Fleet Feet, in addition to sponsoring USATF and HMRRC events, goes above and beyond by employing many local runners, initiating support activities for individual runners needing help, and sponsoring community programs focusing on such issues as hunger and homelessness. "A good example of a responsible corporate citizen," said Ray.
Ray next presented the Presidents Awards to honor those who have given extraordinary service to the club. 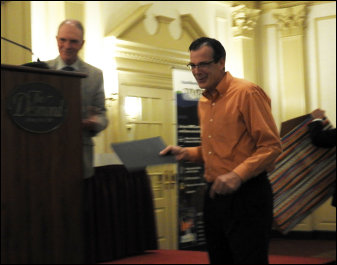 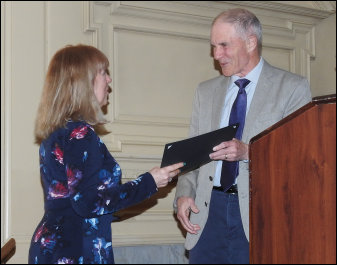 First cited was Mike Lee who has served as a water distribution coordinator over the past 6 years for both the Workforce Team Challenge and the Mohawk Hudson River Marathon, logging in multiple 12-hour days in that capacity.  Next to be honored was Jackie Bown who serves as a reliable assistant to the club's refreshment "queen," Maureen Cox, frequently aiding or standing in for Maureen at club events. Ray especially emphasized Jackie's work of distributing refreshments to the kids in the club's Just Run program.   Last was Christine Bishop who recently became the managing editor of the Club’s online newspaper, the Pace Setter.

Finally, it was time for the Grand Prix Awards. Brian Northan who helped to tally the winners along with Ed Hampston helped Jon Rocco in presenting the awards.  These were given to all those in an age group who were present. 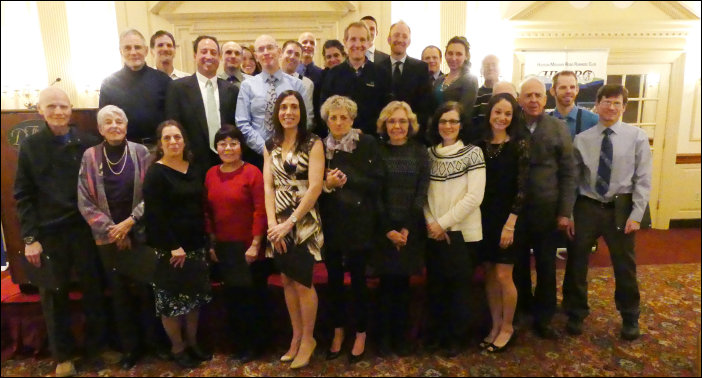 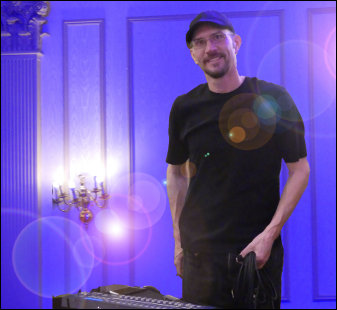 DJ Jason La Juene of Full Spectrum Audio & Entertainment followed the awards ceremony leading the way for all to “dance the night away.”

See you next year!