Forty years of firsts. It didn’t take very long in a brainstorming sessions to come up with that tag for the 40th Freihofer’s Run for Women (FRW). In my 8 years with the Training Challenge I had heard from women that is was their first 5k, the first run after battling a devastating disease, the first time they felt strong after a horrible divorce, the first time they race with their daughter and the list goes on!

In 2017 I became a co race director. I came to the team as someone who had participated. After moving to the area 12 years ago, I immediately put FRW on my calendar. I had run the L’Eggs Mini Marathon in the 80s while living in NYC, but had not raced all women’s run since. I loved the atmosphere and support of the all women triathlons and FRW didn’t disappoint.

That first year I ran by myself. I remember meeting Benita Zahn on the start line my second year and knew a handful of ladies running. My third year was a totally different experience. I was beyond excited to be asked to coach the training Challenge, a program to get women to the start line of their first 5k. It was the first all women’s training program of its size in the region. After working with over 400 women to get ready, race day was tears, smiles, hugs and high fives. I was even more hooked on the race. Over the past 8 years we have added intermediate and advanced groups and attract about 300 women annually. 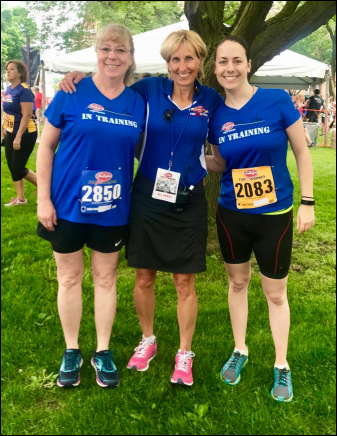 As a volunteer for an event you get a peek at the inner workings. As a director you gain intimate knowledge. This year the veteran race team looked at forty years of firsts with pride and an intense desire to commemorate and celebrate. You don’t have an event for 40 years without doing the right stuff. That changes over the years and we knew we needed to look at desires of women today. With most races up to the half marathon distance primarily women some question the need for an all women’s race. When you look at the history and what the race has done for women and women’s running it is awesome, but the work isn’t done. 40 is a celebratory year for most women. Women tend to be more confident in their own skin; maybe they have had successes in careers or with family or athletics. By 40 most have dealt with their fair share of disappointments, roadblocks, and/or health/family/financial scares. At 40 they’ve emerged stronger and the Freihofer’s Run for Women celebrates that; for all women.

The elite runners love coming to race in Albany on closed roads with just their own goals out in front of them. These women love seeing 3,000 other women tackling the course - battling their own doubts, courageously facing their fears and crossing that line with a smile. It isn’t easy for anyone, but we do it together and in that there is great power. Every woman on the course has a story. This day allows them to reflect, maybe to share and hopefully to celebrate.

I would like to see all women participate, but I know that isn’t realistic, so we try to break down the barriers to entry. To remove the convenient excuses and offer new solutions. As long as we can changes lives, empower women, offer equal opportunity, inspire others, showcase our local talent, and provide vehicle for a healthy active lifestyle I’ll be involved

40 years. Many changes and many to come, but always staying true to the mission to foster the growth and recognition of women in sports and inspire all generations of women to experience the benefits of exercise and good nutrition.

As Patrick Lynskey and I did the media tour we promised a competitive race. Thanks to John Tope’s recruitment efforts the ladies delivered. Sarah Pagano of Brighton, Mass., surged to the lead in the final 400 meters winning with a time of 15 minutes, 48 seconds. Diane Nukuri from Flagstaff, AZ lead for the majority of the race. It wasn’t until back on Washington that Sarah and Steph Bruce, also from Flagstaff, dropped the hammer and the pace. Watching them fly down the hill is just thrilling. Power and grace at its best. Quite a few of the elites ran personal bests and all enjoyed their Albany stay. In my remarks during the media hour I mentioned the talent we have in this area and specifically at the high school level. Once again Kelsey Chmiel, Saratoga HS, followed her State Qualifying runs with the Freihofer’s on Saturday. Once again she placed in the top ten! This year 10th with a time of 16:45. The race also served as the USATF Adirondack Women's Championship. The ARE Ladies took the open race in 54:34 with a team of Diane Ryan, Nicole Soblosky, Claire Collison, Olivia Beltrani and Christie Macfarlane. The ARE masters (40+) team is Katina Reynolds-Greene, Shanley Alber and Melissa Lombard garnered gold with a combined time of 1:05, edging out the Willow Street A team by just 43 seconds. Willow Street Athletic Club A team masters (50+) won in 1:06 with Beth Stalker, Nancy Briskie, Mary Buck and Martha Degrazia.

You know you have a strong elite masters field when the winner is also in the top ten overall. Jen Rhines defended her title running 16:44, bettering her time from 2017 at 43. A testament to women’s strength in their 40s! Most participants don't realize the caliber of the runners on the road this day in June. Joan Benoit Samuelson, the winner of the 1984 Olympic gold medal for the marathon ran 19:52 at age 61. A number of past champions came back to run this year including Elva Dryer, Jacqueline Garreau, and Regina Joyce. These ladies were winning races in their 20s and are still at the top of their age groups. Libby James comes in from Colorado each year and at 81 crossed the line in under 27 minutes.

Speaking of crossing the line, there are 4 women who have been doing it since 1979. Imagine making this your priority each and every year. Not one year did they say ‘I don’t have the time or I am not in shape or any other reason’! Kudos to Bernadette LaManna, Cindy Kelly, Linda Campbell and Denise Herman. This group and the race will always remember Ellen Picotte, who participated 39 times before losing her battle with cancer. So will you cross the line in ’19? 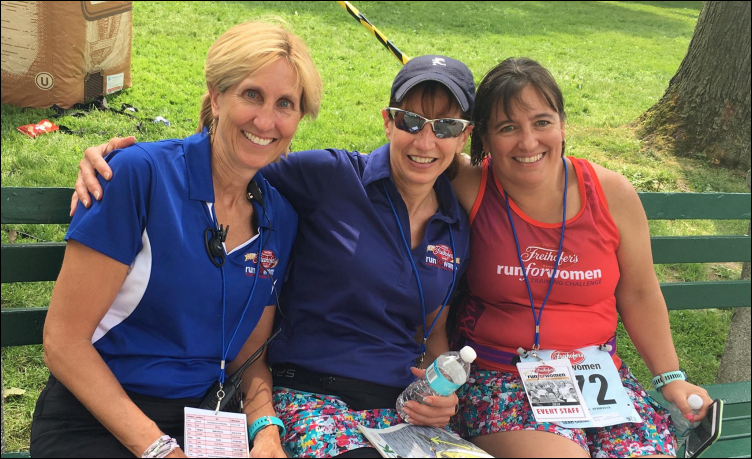 Kristen Hislop is a run and triathlon coach as well as co director for the Freihofer’s Run for Women. She can be reached at hislopcoaching@gmail.com or www.hislopcoaching.com