The Stockade-athon 2018: A Premier HMRRC Event 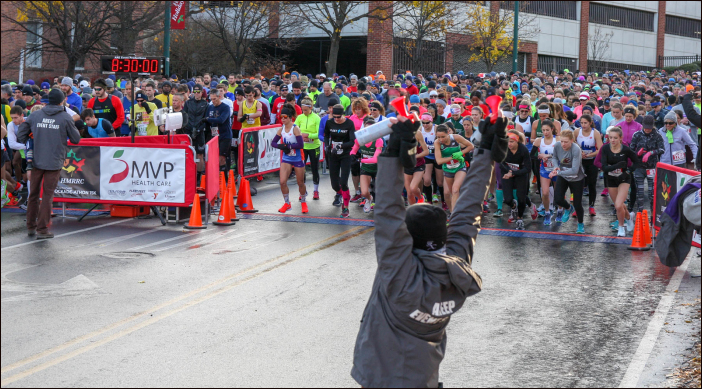 The 2018 Stockade-athon was thrilling with the near photo finish of the top four men coming in separated in total by four seconds. Hard to get more exciting than that! To follow are the links to the newspaper articles from the Times Union and the Gazette, an article by Brad Lewis, who placed 11th, and lastly Ray Newkirk’s observations as one of the race directors. In addition, The Pace Setter Photo Editor Bill Meehan has compiled hundreds of pictures from the race for you to enjoy. 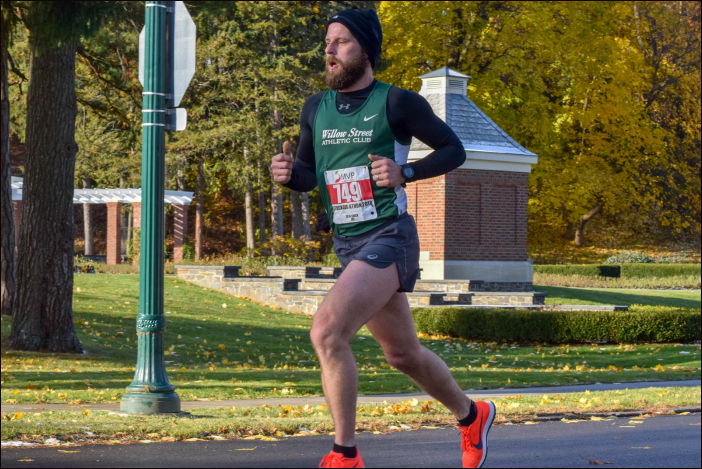 The 2018 edition of the Stockadeathon was one for the record books! Francois Jarry (47:48), from Montreal, outkicked Ben Fazio (47:49) from Troy, Ryan Udvadia (47:50) from Albany and Alex Benway (47:52) of Queensbury. They were all within seconds of each other in an all-out sprint to the finish! Although it wasn’t the fastest finishing time in recent years (the 2016 edition was won in the 45-minute range), the all-out nature of the finish made for an exciting race.

The race started with 2 main groups. The top 4 runners along with Scott Mindel and Patrick Carroll took off to a quick 16:20 first 5k. The next group started with 7 runners, but as the second group hit the uphill around mile 2, it broke down to a group of 4.

The race was a bit cold and windy but the competition was great. There was rarely a point in the race where people were running alone without someone to chase or someone chasing them. The course made a difference in the way people ran this race. There were runners who paced themselves because of the early uphill and those who went out to fast and suffered up it. That uphill near the end of mile 2 lasted for about a mile. How a runner felt during and after completing the hill dictated the rest of their race. With a completely downhill finish, having the legs to kick can make all of the difference. The leaders ran their last 5k about a minute faster than their first 5k!

Derrick Staley produced the best age-graded performance with an 86.13. He also was a scoring member of the winning Open Men’s team – Willow Street Athletic Club.

The USATF Adirondack team results were –

Reflections of a Race Director

The weather was cold, but the competition was hot. The 2018 Stockadeathon saw a finish like few others. The four lead men raced down Franklin St. toward the finish line only steps apart. At the end, Québécois Francois Jarry (47:48) nipped Ben Fazio (47:49) by a matter of feet, while Ryan Udvadia (47:50) and Alex Benway (47:52) were a close third and fourth.

In the women’s open division, Samantha Roecker had a somewhat easier time of it. Her 54:49 placed her over a minute ahead of second place finisher Danielle Winslow (55:59), while Katie Messina finished third in 56:47.

Complete results can be found at https://hmrrc.com/race-info/race-results. Below I mention some places and incidents.

The Schenectady YMCA is one of our sponsors. While both MVP Health Care and Fleet Feet make in-kind contributions to the Stockadeathon in addition to their significant financial support, the Y is critical to the Stockadeathon’s success. This is where packet pick-up takes place and refreshments are handed out. More important, perhaps, are the 60-some Y volunteers who man the packet pick-up operation, the Kids Zone, and otherwise provide support to runners. Chief among these Y volunteers are Jenn Hirtle and Pete Cowie.

Art, my radio guy, didn’t have much to say during most of the race except for “There’s a runner down at mile 5. Being attended to by EMTs. Looks serious.” And that was it – for awhile. That cheerful note was shortly eclipsed by Wade Stockman’s finish. Wade, the oldest male in the race at age 83, crossed the finish line in a respectable 2:06:10, staggered a few steps, and then fell to the pavement, apparently head first. When I got to the scene, Wade was lying in a small circle of red and being attended to by a variety of medical personnel not the least of whom were Willow Street AC runners Karen Bertasso and Colleen Brackett. Wade was placed in an ambulance where he waited for his wife Anny to finish (2:14:15), and was then transported to the hospital. A few stitches and a night of observation followed. When I spoke to Wade on Monday, he was chipper. I think he made mention of the Winter Series!

That “runner down” at 5 miles took longer to identify. The folks at the Y had a name (Linda Plante) for me on Monday – and some additional disquieting news. “We heard that two other runners were injured outside the Y,” Jenn Hirtle later told me. “One broke a wrist and another, a shoulder.” Names? “Don’t know.”

A part of that mystery was resolved on Monday evening when I called Linda to see how she was doing. Her five-mile incident involved tripping over a dog which was running free on the course. Linda indicated that, while she suffered a bump on the head, she prevailed on a helpful Schenectady PD officer to drive her to the finish rather than taking an ambulance to the hospital. In the course of our conversation about her experience, I mentioned that we had those two unknown injuries outside the Y. “One of those was me,” Linda revealed. She tripped over a pipe or some other obstruction on the sidewalk on the way to the start, injuring her shoulder which was subsequently diagnosed as a fractured clavicle. Talk about a tough trip!

The other injured party remains unidentified (unless Wade has forgotten to tell me something). Still, given the large field of runners (over 1300), and the cold fall weather, the injury rate was not unusually high. We don’t wish to discourage anybody from doing this popular race. The good news is that all those injured will run again. Don’t be surprised if Wade is in our first Winter Series race on December 9.

In 2017, the Stockade Cup directorial team (Brian Northan, Jessica Northan, Jon Rocco, Ed Neiles, and I) thought we had hit on a great idea by adding a relay to the 15K where each team member ran a 5K leg we would watch participation swell. After all, look at those 10,000 participants in the Workforce Team Challenge. Ah, the best laid plans. We had 7 teams in 2017 (after optimistically limiting participation to 200 teams). Undaunted, we tweaked the relay a bit (adding military and self-defined teams to the business team category) and tried again in 2018. 21 teams this year. A three-fold increase! Enough to try one more time? Not in the mind of this co-director. Kudos to Marcia and Tom Adams, by the way, for the great organization of the relay!

Without competent coordinators, the Stockadeathon would not be possible. We’ve got them. Liz Chauhan (volunteers), Lisa Chase (awards), Debbie Beach (Saturday packet pick-up), Ken Skinner (course timing and radio), Bill Davis (water stops), Dee Fisher (web site), Tom and Marcia Adams (relay and general logistics), Mike Kelly (kids), Ed Rosenberg (medical bikes). They all do a great job. I don’t think these folks will mind if I a single out two of their number, though.

Haley is our course coordinator, a role he’s filled for years. John was recently elected to the HMRRC Hall of Fame. He has other qualifications for that distinction, or course, but his untiring efforts on behalf of the Stockadeathon must have been a factor. He coordinates with the police, he leaflets neighborhoods, he places his 50-odd volunteers.

The doyenne of HMRRC refreshments, Maureen orders, delivers, and distributes the hot and cold refreshments at the Stockadeathon. It’s a big job. Remarkably, it’s one that she cheerfully undertakes for almost every HMRRC event. IMO, Maureen belongs in the HMRRC Hall of Fame, too (along with Marcia).

Participation in the 2018 Stockadeathon was down several hundred from 2017. That’s not unexpected. Participation in running events has been declining nationwide for the past few years (almost all HMRRC events have seen a decline in 2018). Plus, the Syracuse Half Marathon, formerly run in the Spring, has adopted the traditional Stockadeathon second Sunday in November date as its race date, so there is formidable competition in the upstate area.

A decline in numbers puts a crimp on putting on a major event. Finances are always a consideration, and having several hundred fewer runners means considerably less income. But that's not what worries me about the Stockadeathon (here comes the op-ed piece). Securing volunteers to help out at the race is becoming increasingly difficult. We now rely on schools to man two of our water stops (in return for a small financial contribution) But we struggled this year to find course marshals. And those who did raise their hands to fill that role were the same folks who have been doing so for years. Like me, many are no longer spring chickens. The Stockadeathon – like many other HMRRC events – needs new blood if it is to survive. Runners should appreciate that, if they want races to continue, they need to step up as volunteers.

Happily, at least two younger runners (by my standards) – Brian Northan and Jessica Northan – answered the call to serve as co-directors in 2017. They performed yeoman’s work this year. Management of the race will be in good hands in 2019. But, if you don’t contribute, the future is less certain.