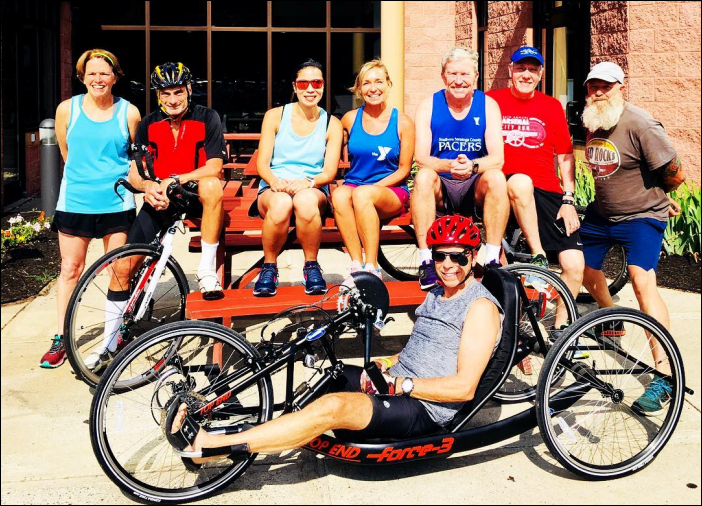 A little over a year ago, a new amputee was sighted riding his bike around town. Soon after I received an email from Pat Glover. I immediately invited him to Vent Fitness where I am a personal trainer.

When I met Pat he was standing, with help from his crutches, on his remaining leg with a smile on his face. Pat had been an athlete all his life and well known in the local running community. In fact he had coached a few of my clients in running at some point. Pat went from being out running and setting courses to lying in a hospital bed missing a leg over night. Despite being an athlete, suddenly cut down in life, Pat wasn’t feeling sorry for himself, he wasn’t sitting in a wheelchair, he was up and about on his crutches getting through his day with a positive attitude. Pat had been the amputee sighted riding his hand-peddled bike around town.

When you lose your leg and have the desire and determination to rebuild your life to become an athlete, who is the best person to help? Someone who has experienced losing a leg and rebuilding their life. Only someone who has lost a leg can truly know what it is like. I had experienced life with one leg, I became an athlete with one leg and I became a runner after losing a leg. I knew Pat would be all right and I knew I could help and motivate him to once again be an athlete.

I take amputees through three stages of training.

Stage one: Strength, Balance, Educating and Accepting their new body

During this stage I got to know Pat and helped him understand the process and what to expect. I worked on getting his body balanced and prepared for walking with a prosthesis. Every session I enjoyed Pat’s enthusiasm and I learned so much about running and becoming part of the local running community.

This is the stage amputees are excited for. It is the stage the doctors and prosthetist think will fix us. It is in this stage however that you realize the prosthetic leg is only a tool. It is not the magic bullet that makes life normal again. It takes time, a lot of working through pain and a lot of hard work to walk with prosthesis. This is a very difficult and frustrating part of the recovery. In this stage we explored Pat’s new leg, I took Pat out of his comfort zone and kept reminding him that he was an athlete. He would need to use the same strength and determination, he once used to train for running, to get through this. Pat had some stumbling blocks in this stage but he persevered and got through it.

Stage Three: This stage depends on the amputee’s goals. Pat’s goals are to return to running, cycling and Fly Fishing and that is what we are currently working on.

Pat is walking well and ready to take the next step in his journey. Pat joined my team of 5 amputees to pull a bus and I will continue to get him involved in these kinds of activities. The support group of amputees I have don’t sit around complaining, we run Spartans and pull buses.

The workouts will gradually get more difficult but the reward will be huge. Pat will work on becoming more and more functional with his prosthetic. Pat will continue to work toward his goal to run and cycle again. I will be with him every step of his journey. Our relationship has been a mutual one. While I help Pat achieve his goals, he has inspired me to push harder to meet my running goals and participate in triathlons. I will be honored to run along side Pat in his first 5K, as an amputee, someday soon. 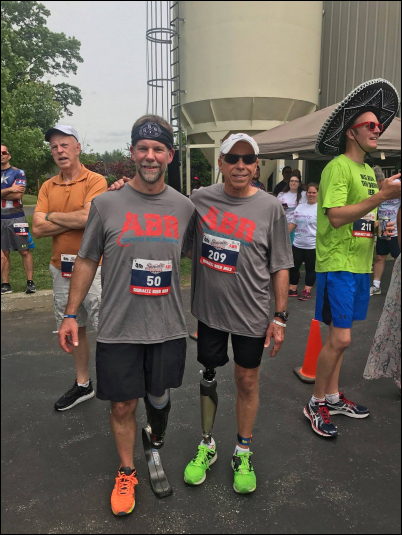