I'm a physician assistant in orthopedics and as a competitive athlete through high school and college I've always been interested in sports medicine, the physiology of athletes and current training philosophies

In January 2013 I hired a running coach for the first time. It was by far the best decision in my life. For once I had structure, a plan and someone to give me feedback. He showed me how one can have such a positive experience, achieve goals and be current with the latest research and trends.

Between my constant desire to learn, my positive experience with my own coach, my running background (17 BQ, 2:45 marathon and 1:17 half marathon) and the little dabbling I've done helping assist a collegiate soccer team and kids running program, the decision to help others achieve their goals was easy.

I firmly believe anyone can improve towards their goals with the right tools and willpower and I want to help them realize that and achieve it!

Mathew Nark is the owner and head coach of Nark Running and Strength in Albany, New York. Mat's run coaching career started in 1993 when his SUNY Cobleskill cross country team abruptly lost its coach. He jumped in to help and quickly found himself at the library studying anatomy and physiology - rather than his intended major, hospitality management. In addition to being a McMillan run coach, Mat has obtained multiple fitness certifications, including Functional Movement and StrongFirst. As a fitness expert and lifelong runner, Mat designs programming to help clients become stronger, faster runners, while staying injury-free. He has helped hundreds of athletes achieve PRs in every distance, from the mile to the marathon. Mat's true passion is unlocking an athlete's potential, especially when she or he has yet to recognize it. Learn more at Narkrunningandstrength.com 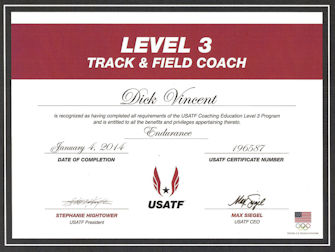 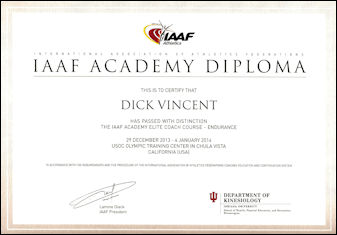 Dick Vincent grew up in Catskill, NY, and took up running in 1972 as a way to improve his fitness and overall health. On April 23, 1975, eager to do well in the following year’s Boston Marathon, he decided to try running every day. That streak would continue until October 1, 2009.

After running Boston in 1974, Dick would go on to compete in over 250 marathons and ultramarathons throughout the world. While he was more attracted to the atmosphere and experience of trail ultramarathons, Dick did run sub-16 in the 5k, sub-2:40 in the marathon, and consistently was a top finisher in ultra-distance events.

Dick’s coaching career began in the late 1970s with the Onteora Runners Club. In 1986, he received his Level I USATF Coaching Certification. He would go on to coach at the high school level for a few years but his primary focus was always private coaching for adults. In April 2011, he created the weekly track workout series for the Albany Running Exchange and also is the full time coach of the ARE Racing Team.

Dick now holds a Level 3 USATF Coaching Certificate, the highest level of certification, which can be earned from USATF. Additionally, he holds a Level 5 certification from the International Association of Athletics Federations (IAAF), passing the IAAF Academy Elite Coach Course in Endurance with distinction.