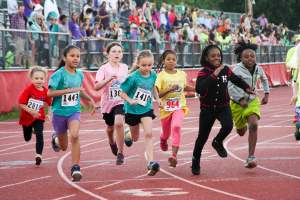 The Just Run program originated in California, but has become a national phenomenon.It is designed to bring together elementary school students to participate in running (and in the fall, cross country) practices that are at once competitive and recreational.Every year the HMRRC has put on the track meets, the numbers of children and schools involved has increased dramatically. This year, on Tuesday, 13 schools brought over 400 children to the race, and on Wednesday, there were 13 schools with over 550 entrants. Remarkably, the schools entered were from seven different counties. (For the schools and children involved, see the results posted on this site.) 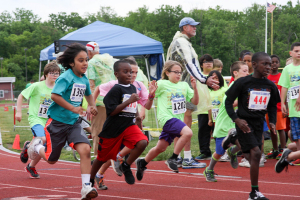 I have been a member of the HMRRC for nearly forty years, and I can say without hesitation that the Just Run program is the single best thing the club sponsors. As a non-profit organization, the HMRRC has an obligation to give back to the community, which is exactly what Just Run does. The club does other activities (scholarship programs for individuals and organizations) that meet this obligation, but no other activity reaches out to as many people as does Just Run. The program brings together young students from a variety of demographic areas. Inner city and rural children are running with suburban children. They cheer each other on. The children were very well behaved.

Students can choose two races to run, against runners of their own sex and grade. The events include a 50 meter dash, 100 meter dash, 200 meters, 400 meters, 800 meters, and 1500 meters. When they finish, they are given their times, and the results are effectively and efficiently recorded by Dan Doak's crack staff, and sent to Marcia Adams, who gets the results out right away. After the races are over, with each finisher getting a ribbon from Dick Adler and his ribbon crew, the students are fed pizza and given a goody bag. 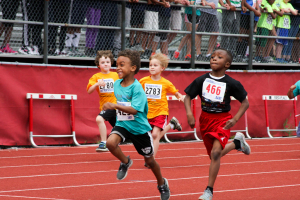 The primary reason why this event goes off so smoothly is due to Ken Skinner, program coordinator, who has assembled a crack staff of volunteers. The meet director, Bob Oates, keeps the children in control. Thanks to Bob, the race this year was held at Guilderland High School, when it became impossible to return to the former host, Union College.

While I watched these races go off so smoothly, I was reminded of "The Fellowship of the Rings" by Tolkein. Bob Oates is like Gandalf, a magician who conjures up peace and joy. Bob does not have a staff like Gandalf (though after his knee replacement, he might have used one). Instead, Bob wields a bullhorn to keep the masses at bay. I kept waiting for him to call out on the bullhorn the saying of Gandalf, "Run, you fools," but Bob always takes the high road. The rest of the volunteers form a solid fellowship, with the expert guidance of Chris Rush as the starter and Pat Glover as the finish-line master. I will leave it to the other volunteers to decide what part of the fellowship they represent: elfs, dwarfs, or humans. I was the token goblin. 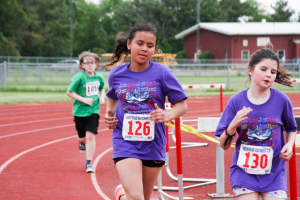 What is particularly remarkable about the Just Run track meets are the crowds they draw. Chris Rush, who officiates at numerous high school meets, told me "there are more spectators here than at most track meets." Parents and relatives cheer on their younger members, often vociferously. I worked at the finish line as a timer, and during the Wednesday meet I saw an elderly woman sitting in a lawnchair watching. I asked her, "Are you here to watch your grandchildren?" She said to me, "I'm here to watch my great grandchildren." What a terrific opportunity.

In case you wonder if the children enjoyed themselves, take a look at Bill Meehan's excellent photos on the HMRRC Photo Page. They show group after group of smiling teammates, and smiling competitors.

All I could think of during these races was the line from one of my favorite movies, "Field of Dreams": "If you build it, they will come." The Just Run program reveals to youngsters how much fun and how satisfying running can be at any age. One hopes that someday later in life, some of these children will realize the dream of becoming a dedicated runner.