A Running Friendship For the Ages 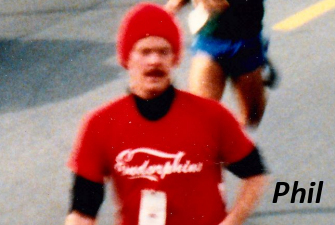 Phil and his wife Deborah lived in the apartment below mine, which was on the third floor of 208 Union St in the Stockade section of Schenectady. I don’t recall exactly how we met, but we were both quite outgoing so it couldn’t have been long. We soon started running together. I was probably wearing Brooks Vantage or some such shoe from that time frame; I still recall when I stopped running in Converse basketball shoes and my socks no longer ended up around my ankles after a 3 mile run! Cushioning does have its advantages. On our first run, we headed out across the Western Gateway Bridge into Scotia, and I asked Phil about racing. He mentioned that you have to avoid going out too fast; he recalled a time when the mile split marshal called out “4:40” and he knew he had. I knew then I was out of my league! Phil had run for Manhattan College, and once completed a 5-mile cross country race in under 25:00. He had two or three brothers, and I believe they all ran as well.

We fell into running together, with a usual meeting time of 5:30 AM. This prevented slacking, as it would have been very bad form to have your buddy waiting for you at such an early hour. I must have had a good alarm in those days! As we continued, Phil taught me most of what I now know and love about running - the camaraderie, the adventure, the physical exertion and mental discipline, and the sheer animal joy of it all. As with college friends and others that we live through life-defining times with, I’ll never forget him. 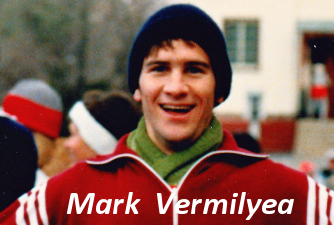 Phil worked as a marketing manager for Troy-Bilt. He was (and is) one of the most talented and creative people I’ve ever met, and we shared a love for wild and crazy antics. He and his brothers had created alter egos for running, and his was Cheba M’Har, a Rastafarian. I had a colleague who lived close by and also ran, but was much more conventional than we were. We tried to dissuade him from going out with us, but with difficulty - until one long run when we headed out the bike path from SCCC into the hills west of Rotterdam, and took a shortcut that included a run down a steep embankment to a stream and back up the other side. Phil, of course, was leading, and when he reached the lip he stood gesticulating wildly and yelling “Cheba! Cheba!!” He wasn’t doing it to intentionally make our companion uncomfortable, but I think that was the last time we ran as a threesome.

Our favorite run was a two-bridge, 4-5 mile loop including the Western Gateway and Freemans bridges, where we ran along Sunnyside Rd in Scotia - often detouring around Collins Park to run that magical shady block between Rte 50 and Washington Ave with overhanging leafy trees, expansive green lawns and architecturally interesting homes. A less-favorite but aromatically interesting route took us towards I-890 and Broadway, and past a food plant that often emanated a strong aroma of cheese - perhaps it was making Italian food. Since the aroma was contained to a few low-lying blocks, Phil referred to this as a strange weather phenomenon called a “cheese inversion.”

I ran my first race - the old Quaker Street Country Run - with Phil in 1982. We started out across a field covered with furrows and fallen grass, with challenging footing. I completed the nominally 5k course in 24:04, happy just to stop running. I assume Phil was far ahead of me. We ran it again in 1983, and I was 3 minutes faster, but still well above what would become my typical road 5k time for the next 20 years of “18 and change.” Phil and Deb also accompanied me on my trip to Great Barrington for the Josh Billings Great Runaground, a wacky triathlon involving a hilly 27 mile bike ride, canoeing around a lake, and a 10k run during which your legs will be seriously cramped from the lack of use for the long canoe ride. It took me 4 hrs and 10 minutes, and I was really happy to see the finish line and share some food and good times with them! He was also my photographer for my first Stockade-athon that November, which I ran in polyester sweats with a cotton towel around my neck. I guess it was cold, but in retrospect I sure was a sight. I returned the favor the following year, from which I have a great photo of him throwing me his gloves while wearing his “Endorphins” shirt (more on that later).

Over the ensuing few years, we ran hundreds of miles together, and shared thoughts, dreams and ideas over hundreds of hours of conversation. Some of the more memorable runs included:

Phil’s creative nature extended well beyond interesting running exploits. He was a fan of The Runner - a low-budget, alternative competitor to the much more popular Runner’s World - and we shared issues and discussions of stories therein. We followed our heroes, particularly Alberto Salazar - and Phil, a master of the running craft, loved the details. After the famous ‘82 NYC marathon duel with Rodolfo Gomez, Salazar was quoted as having seen Gomez clench his fists as they matched strides - and knew Gomez was suffering more and it was time to make his move. When Phil read about endorphins and “runner’s high,” he had an artist friend of his make up T-shirts with “Endorphins” in script identical to that on Coca-Cola - in reference to similar shirts with the word “Cocaine” that he was aware of. I still have mine. He also once told me of a woman with a generally negative tone that replied to a pleasant query about something - perhaps a nature scene - with “what’s not to like?” Phil told me he wanted to grab her nose hard, shake her head side to side with it, and say “THAT’S not to like!” He believed in expressing himself. He and Deborah once gave me a birthday card signed “Fill Up and Debor Ah.”

Phil was a man of his times, and lived hard and fast. At one point his doctor advised him to “detoxify” himself - Phil said he’d been drinking too much coca-cola and eating too much junk food. He related how another doctor who he saw for a running injury advised him to run in the middle of the road (to avoid the crown), late at night (to avoid the traffic), and to run farther (so he would run slower). He loved relating such seemingly odd experiences with a hearty laugh.

Phil and Deborah moved to Connecticut for a new direct marketing job in mid-1985. My fiancée’ and I visited them there once, spending a wonderful weekend running, making dinners, and enjoying music. We ran a 10k race together, and I was taken aback to be ahead of him - he had started to slow down a bit. I have a note about a reunion run across the Western Gateway Bridge in November 2006, but no strong recollections of that - I assume he must have been in town for a business trip and caught up. Of course by then we had three children in the family and so much else going on that it was all a blur.

Through the wonders of Facebook and Linkedin, I re-connected with Phil a few years ago. He’s still in Connecticut - so many of us settle down that way - but doesn’t run or race much anymore. However, to me he’ll always be the friend and companion I knew 30 years ago - exuberant and talented, someone with whom you could share a run, an afternoon or three years and love every minute of it.